Ottawa to Montreal on the Ottawa River

Police officer:  “You can’t take a canoe to Parliament” Police car pulls up as Geoff portages the canoe towards the Parliament buildings for a triumphant photo. The police officer explains that “props” are not allowed on Parliament hill. We had a short discussion as to why we think a canoe is a mode of transport, rather than a “prop”.  He listened politely, then pointed to where we needed to exit immediately. This is the closest we could get to Parliament Hill for a photo. This turned out to be the best photo we could get on Parliament hill (outside of the fence.) Max Finkelstein wrote the book “Canoeing a Continent” after paddlong from Montreal to Bella Coola.

What are the chances that one would “bump” into a fellow cross-Canada paddler?  Obviously pretty good!  Max was watching his son’s Sprint Canoe race (which he won) when he spotted us paddling by.  He came to the lock and quietly began asking questions.  After a few moments he introduced himself.  It took me a moment for it to sink in.  After that, we were very excited.  We chatted with him until he was almost late for his son’s race.  It was a real pleasure meeting him.  We hope our paths cross again.

Interesting to note that our best and worst lock experiences happened in one city! Pierre had Jude giggling with his impromptu puppet show.

The best occurred at Hartwell locks where we had a friendly, enthusiastic, helpful Lockmaster.  We locked down with a wonderful group of boats.  Pierre Brazeau and his wife, Mimi, were in a boat on front of us.  He entertained Jude with a puppet show and guitar playing.  We were grateful for the cold bottles of water too.  Geoff chatted with Magda Kubasiewicz in her kayak.  Meanwhile, beside us, Jacques Gauthier offered us a place to stay 100 km downriver.  It was friendly and festive. A flight of 8 locks called “The Ottawa Locks” that lead to the Ottawa River.

The worst happened at the Ottawa Locks where we had a cascade of water come over the locks onto us and into the canoe (after we were told to stay at the back.). Instead of saying they had made a mistake and were sorry – we were told “these are the locks, it can happen.”  Hey guys… a little humility goes a long way, everybody makes mistakes.

Portaging into the Chateau Laurier Hotel

Reaching Ottawa has a major milestone for us and we wanted to make the most of it.  We spent one luxurious night in the Chateau Laurier Hotel.  We took in as much as we could fit into our short time there. The valets were really good sports about it all. We stored our canoe in a ballroom. We really enjoyed the light show that evening.

Views along the Ottawa River Every town along the Ottawa River has a church steeple to mark its location along the shore. Beautiful. One of the many beautiful views on the Ottawa R.

The Carillon lock is huge!  65 feet!  There is a floating dock inside to tie to.  I walked Rane up and down the raft while the lock lowered.  Very impressive. An enthusiastic family learning to canoe almost ran into us in the Lachine Canal. There was never any real danger, as neither of us were travelling very quickly. Rane loves his thumb (and his stuffed monkey.) Geoff and Jude having peanut butter sandwiches while waiting for a lock.

We had a fun time during the interview with Jeanne Armstrong of CBC Radio Ottawa.  After donning a lifejacket, she climbed in beside Jude for a tour of the Ottawa River below Parliament. Jeanne Armstrong of CBC Ottawa interviewed Jude in the canoe on the Ottawa R.

Rene Bruemmer is a great interviewer.  He made us feel comfortable and asked lots of good questions.  It helps that he has a good sense of humour too!

Full pictures and article can be accessed at the following link: Dinner with Kim Holmes and Laurie Holmes on La Terrasse with a beautiful view of Parliament and the Ottawa Locks. Mau played with Jude at the park while we finished lunch. Jude talking the ears off Stan and Sheila Twerd in their gazebo. What a fabulous view! Rita Murray sitting at a picnic table with Geoff to point out places to camp and people she knew who could help us along the way. Luc St. Laurent and Marieve Dionne (and her cousin?) waved us off in the morning. 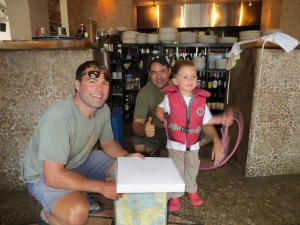 Zeus is the chef at the Violet Angel at Ste. Anne de Bellevue Leaving Montreal Harbour with “My Resi” beside us to ensure we entered the currents safely.

One Response to Ottawa to Montreal on the Ottawa River