Terry Fox has been a big inspiration to Geoff since he was a child. There was a lot of snow on Mount Terry Fox; otherwise we would have taken a day to run the trail. Kinbasket Lake was low when we arrived, revealing the stumps. These were tricky to navigate in some areas, especially when the water was choppy. Bad weather can blow in quickly – luckily it leaves just as fast. 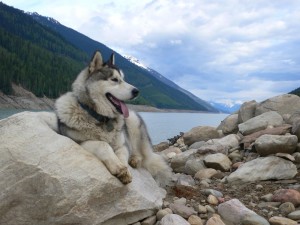 If Taq is tired enough, any place will do to rest his head! We try to avoid the highways whenever possible. They are busy, have varying shoulder widths (especially narrow on bridges), and usually have broken glass (hence Taq’s paw injury). Taq isn’t afraid of much – only guns and semi-trucks. He would move as far to the side as possible whenever trucks passed. The Columbia R. flows swiftly below the Kicking Horse R. Paddling against it at high water is already difficult; log jams on shallow gravel bars and sweepers along the bank make it more dangerous. Fortunately, the Columbia R. settles down and becomes a beautiful marshy paddle. It is a bird-lovers paradise.

Dry, flat areas in a marsh are difficult to find. We had to compete with flocks of Canada Geese for this campsite. Unfortunately, they left lots of scat behind. Geoff used his paddle to “sweep” his kitchen clean. Harrogate Pass was the first of three passes we tackled in our quest to reach the Bow R.  It proved to be the most challenging because, although it wasn’t the highest pass, it had the largest change in elevation (a gain of 1338 m from the Columbia R.).  Harrogate Trail has had many uses over the years:  to transport horses between the Columbia and Beaverfoot valleys, moving whiskey during prohibition, hunting and hiking.  It took a lot of work to clear the trail because it hasn’t been used as much in recent years.  Geoff and I carried a wee flask of whiskey up the pass to toast those who travelled the trail before us.  The last half of the trail was very steep.  There was still a foot of snow on top of the pass where Ben Guerard, Geoff, Taq and I posed for a picture at 2129 m. Thankfully, the Wolverine Pass trail has been designed for travel by horseback, and is still used regularly.  As we approached the pass, we could see the Bugaboo Mountains behind us in the distance, with Mount Gray beside us.

Geoff almost navigated a large drift near the top.  This picture was taken right before Geoff’s foot sunk in, causing him to topple over and slide down the rest of the slope on his back and shoulders.  Fortunately, Geoff held the canoe above his head with his arms straight to prevent him from being squashed by it.  Once we established that Geoff was all right, we burst into laughter at the ridiculous sight.

We needed to head back down the pass to resupply and rest Taq’s foot.  To protect the canoe from being nibbled on by critters (especially porcupines), we propped it up on the hitching post and ladder at the Wolverine Warden Cabin.  We thought hikers might do a double-take upon encountering the 18 foot red canoe – we were right.  Some hikers from Valemount sent a note to our webmaster saying that it “definitely stood out” on Wolverine Pass. Our third and final mountain pass was the Continental Divide, at Ball Pass.   A huge fire in 2003 burned a large area of Kootenay Park.  The Hawk Creek Trail leading up to the pass was beautiful.  There was a lovely contrast between the green forest floor and the blackened trees, with lots of wildflowers and incredible views of the Rockwall in the background.

Geoff and Ben alternated carrying the canoe up the mountain while I carried the pack.   It contained, among other items important to our survival, a bottle of champagne.  Our celebration was interrupted by a brief rain shower, but it didn’t dampen our spirits.  We will be paddling with the current until Lake Winnipeg, MB!  YAHOO!

The end picture shows us descending past Mount Ball.  *Note:  the water is now flowing with us ☺ A very special thank you to Ben Guerard.  Who else would offer to help portage an 85 lb. canoe over 3 mountain passes?  We were inspired by his strength, stamina and humility during the grueling portage. For us, paddling into Calgary marked the transition between mountains and prairies.  We spent 2 ½ years working here to save money for the trip (you can almost see our old office windows in the background).

Thank you to the following people: Where do we go from here?

We are looking forward to 2,000 km of sunny skies and downriver paddling to Lake Winnipeg.  The Bow R. joins the Oldman R. and turns into the South Saskatchewan R. at The Grand Forks, AB.  At Medicine Hat, the river turns northeast and flows through Lake Diefenbaker, SK, to Saskatoon.  Near Prince Albert, SK, the South and North Saskatchewan R. merge to form the Saskatchewan R.  We’ll then paddle near Cumberland House, SK, then through The Pas, MB, into Cedar Lake and through Grand Rapids into Lake Winnipeg, MB.